A WAY OF LIFE FACTS AND RESTOARTION PROJECTS

VEHICLE HISTORY OF THE T1 TRANSPORTER

The origins of the Type 2 (VW TRANSPORTER T1) are credited to Ben Pon, the Dutch VW importer, who in 1946 had visited the Wolfsburg factory with a view to importing Beetles (or KDF Wagens as they were then) to the Netherlands. However on his trip he saw something that interested him more.What he had seen was a homemade parts mover based on a Beetle chassis, but with the driver and controls sat atop the engine, with a large flat load bed in front of them, this little vehicle was called the Plattenwagen. Pon made a quick sketch and returned to Holland.Ben Pon returned to Wolfsburg in 1947 with some more detailed sketches of his new concept, and a few criteria it had to meet. Namely; it had to be able to carry a load of 1500kg, and that the driver and controls should be mounted at the front of the vehicle.

Development began on the project in 1948, and 3 short months later the first prototype had been made. After initial testing it became apparent that the modified T1 chassis wasn’t going to be sufficient for the job, so a ladder chassis with a separate body was employed.Upon looking at a split screen bus you’d be hard pushed to believe any consideration had been give to aerodynamics during its conception, however the initial prototypes had achieved very poor drag coefficients, around 0.75. The wind tunnel at the technical University in Braunschweig had been used to refine the shape, and the Cd was reduced to around 0.48 by the introduction of a V-shape to the nose and windscreen area. Heinz Nordhoff approved the new vehicle for production in 1949, and the first production model left the production line in November of 1949. A total of 8 vehicles were made in 1949, with the split being; 6 panels, 1 Kombi and 1 Microbus. By the end of 1950 production was over 8000 units, rising to nearly 50,000 for the last year of Barndoor production.

The term “Barndoor” refers to buses made between 1949 – March 1955, and is believed to be coined by Jeff Walters in the 1980’s. Barndoor buses appear to look similar to the later split buses on initial inspection, but there are quite a few differences once you start to dig a little deeper.The Barndoor bus has no “peak” above the windscreen, no tailgate, a small rear windscreen, a much larger engine lid (this is what the “Barndoor” refers to, not as many believe the side cargo doors) with the petrol tank sat in the engine compartment, to the right of the engine, and the spare wheel mounted on the left hand side. Barndoor pickups and ambulances are slightly different in this respect as ambulances feature a rear hatch (see ambulance section) and pickups have a smaller engine cover, however both of these models use a cut down version of the original engine cover. Whilst there are a lot of Barndoor parts that will fit a later split, and vice versa there are quite a few parts that are specific to the Barndoor; pedal box, reduction boxes, 3-post badge, spare tyre rack, front windscreens, seats, roof, dashboard and instruments, engine lid, rear apron, front suspension and steering.Barndoor buses also came with a 16” road wheel, not the 15” or 14” that later buses came with. The Commercial was the most basic of the buses offered by VW, a simple panel van, with no tailgate, no side windows and two opening cargo doors on the respective passenger side. Panels were also used as a basis for some of the camper conversions such as the EZ Camper and the Sundial. The Kombi was the next level up, still basic, with no headliner, carpet and very sparse door panels, and featured 3 side windows on each side of the cargo area, and two rows of seats, in the middle and rear, these were easily removed by one person. Kombis were also used by the camper converters.

The Standard was based on the Kombi and was considered the entry-level passenger vehicle, slightly better levels of interior trim than the Kombi. Standards were usually finished in a two tone paint scheme.The Deluxe was the premium model in the range, the exterior was fitted with polished aluminium trim on the beltline, and 4 more windows had been added. 2 on each side, and 2 wraparound windows which spanned the gap between the tailgate and the side glass on models up until 1963, these Deluxes were known as 15 windows, the later models with a larger tailgate and no corner glass were known as 13 windows.It was possible to order both the 15, and 13 window Deluxes with Skylight windows, (AKA Samba’s) bringing the totals up to 23 and 21 windows respectively. Samba’s also came with a full length canvas sun-roof, though could be spec’d from the factory without. Early 15’s and 23’s featured corner windows and skylights made of Plexiglas, though from 1954 the Skylights were replaced with glass, and in 1955 the corner windows were also replaced with glass.

The Single Cab Pick-up was first produced in August 1952, the fuel tank had been moved to just in front of the rear axle, the engine cooling vents had been lowered to further down the side panel, to make room for the drop-sides. Access doors for the “Treasure Chest” toolbox under the bed were available as an option along with a canvas tilt kit. Up until late 1953, the drop-sides were smooth with no pressings. The early double cab pick-ups (1953-58) were actually converted single cabs converted for VW by a company called Binz, these early double cabs are easily identified by the “suicide” rear door. Up until 1960 all double cab drop-sides had a seam in the middle of the side as they were in-fact shortened single-cab versions, rather than their own specific pressing.The ambulance tailgate was bottom hinged and strengthened allowing stretchers to be slid in from the back. Ambulance models also featured a glass and metal divider between the cab and the cargo area, 1951-55 Ambulances featured a fresh air scoop mounted above the windscreen, with two fans mounted in it.Other features unique to ambulance models were; jump seats, grab rails on the ceiling, cargo area to cab buzzer, frosted side glass windows, additional sound deadening, additional shelving and cabinets, stretcher tables. Ambulance models also had the option to specify which side you wanted the cargo doors on.Barndoor ambulances also have the fuel tank moved to in front of the gearbox/axle assembly and the spare wheel moved to between the cab and cargo area, 2 features which became standard on later Split buses.

By 1954 production at the Wolfsburg factory was at its maximum, and VW needed a new factory to produce the Type2. VW moved fast and by early March 1955 the first bus rolled off the production line at VW’s new factory in Hannover. Just over a year later production of Type 2’s finished at Wolfsburg, and Type 2 production continued solely at Hannover. This move lead to some unique features of buses made during the period of the Wolfsburg to Hannover handover, specific to buses over the 1955-56 model years. Examples include; the fuel flap seal, fresh air vent, speedometer, cargo floor, rear transmission tunnel, front seat springs, 3 piece dog legs, Bakelite interior light, deck-lid bracing, and a rear hatch that only could be propped in one position.

Early Type 2’s were powered by the 1131cc air cooled; flat 4 engine, mounted on a transaxle transmission. With the engine producing a heady 25hp, performance wasn’t what you’d call blistering, but the van was capable enough. VW used an ingenious method of reduction boxes on the bus to make the most out of the limited power available, these reduction boxes came on all Split screens; they effectively operated as another gearbox, and provided more torque at the expense of higher engine revs, and a slower top speed.

1953 saw VW upgrade the power plant to 1192cc 30hp unit, and then in 1955 the compression ratio was increased. In 1959 VW unveiled a new version of the 40hp engine, this however, proved to be so unreliable that all the buses equipped with the engine were all recalled and fitted with a the previous unit. A few vans did escape the recall, and if you were to find a running example of one these today, it really would be a survivor as the engine was discontinued with immediate effect, and as such has no parts support whatsoever.

In 1962, VW produced a heavy duty version of the Type 2, load capacity was up from 750kg to 1000kg, the 15” wheels had been replaced by wider 14” versions, and the engine had been upgraded to a 42hp 1500cc engine. This model was such a success that the following year the 1200cc transporter was discontinued.

’62 Buses also had new “fisheye” type indicators replacing the “Bullet” type ones that had been used on the Bus and Beetle since VW made the switch over from Semaphores in 1958. 1963’s Type 2 had a more powerful 1493cc 51bhp, the ’67 Beetle used a different variant of this engine to produce 54hp.

The 1963 model year bus had a larger tailgate, and in turn a larger rear window, this meant that the Deluxe versions of the bus no longer featured rear corner windows, so went from 23 to 21 window (for the Samba versions) and 15 to 13 for the non Sambas.

Whilst VW stopped production of the Split-screen bus at Hannover in 1967, as with a lot of models, production was moved to a less developed country, in this case Brazil.

One bizarre story that affected bus sales in the US was the “Chicken Tax”. In the 1960’s France and West Germany placed tariffs on the import of American chicken, diplomatic discussions ensued and failed, and in 1964 two months after taking control of The White House, President Johnson retaliated by imposing  25% import duty (around 10 times the average US tariff) on potato starch, dextrin, brandy and light trucks.

According to official lines, the tax was equal to that of the lost revenue for the exported chicken. Audio tapes from the White House revealed slightly deeper routed reasoning’s, with discussions between Johnson and the president of the United Auto Workers union resulting in a deal where the Union wouldn’t go on strike just before the 1964 presidential election, providing President Johnson acted upon VW’s increasing number of vehicles being imported into the US. The chicken tax affected all commercial variants of the Type, so panel vans, and pick-ups; this was to have a massive effect on VW’s sales, with Type 2 Commercial sales falling by over a 3rd between 1963, and 1964. The effects of the chicken tax were that by the late 60s VW commercial vans were virtually non-existent in the US. As of 2010 the chicken tax still remains in effect.

The Fleetline Bus is basically a 1950’s spec split-screen bus that was produced in kit form in Brazil then shipped to South Africa for assembly, as a complete knock-down kit. Essentially unchanged from the original spec, there are a few differences once you look a little closer, the VW emblem on the front of the bus is pressed into the panel, as opposed to being a separate part, the cargo doors are similar to that of a barndoor bus (i.e. lighter in construction) they have pre ’64 style door handles, and pre ’64 style small rear tailgates. They were available in 3 different versions, a basic panel van, with the narrow tailgate, but Deluxe type wide rear windscreen, a bus, which was very similar to a deluxe bus, but without a sunroof or skylights or a wide bodied pickup. A rare beast, Fleetlines were only made from 1976 to 1978, and VWSA confirm production numbers of 849. 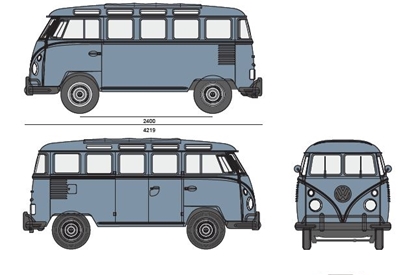 SHORT HISTORY OF THE VW T1 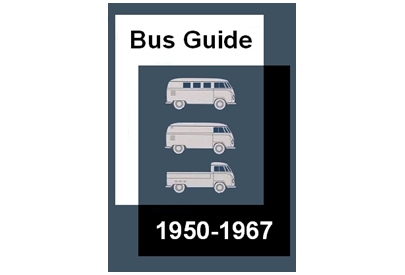 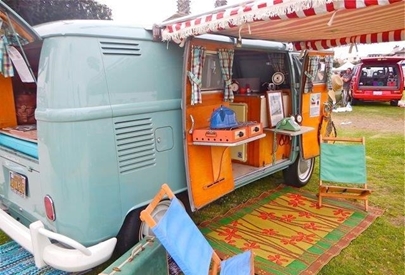 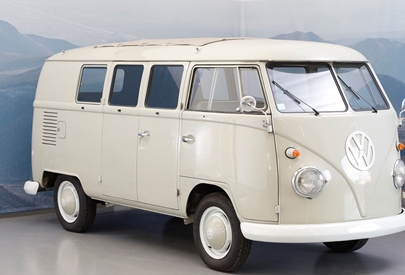